I'm hosting an "after hours" party! Wanna come? Seriously excited to be the keynote speaker at the Michigan Notable Book's "Homecoming for Celebrated Authors" event on Saturday, Sept. 20, at the Grand Rapids Public Library (main library) honoring nine of this year's Michigan Notable books and authors. Drinks, food, fun, book signing ALL FOR FREE. Registration is limited and required. VIP reception @ 6:30; ends at 8:30. Come have wine and words with Wade, but, most importantly, come celebrate and get your hands on some of the state's most noteworthy books for 2014!
Register by clicking here!
https://www.eventbrite.com/e/homecoming-for-celebrated-authors-registration-12696368179

Even though it's been over three decades since I last lived at home and headed off to school, I swear I can still hear my father singing at the top of his lungs the moment September arrives:

Hey look me over, lend me an ear
Fresh out of clover, mortgaged up to here
Don't pass the plate folks, don't pass the cup
I figure whenever you're down and out, the only way is up

My dad was an early morning man, thanks mostly to the military. He never needed an alarm clock. As soon as the sky brightened, the first bird chirped, he was up to greet them. 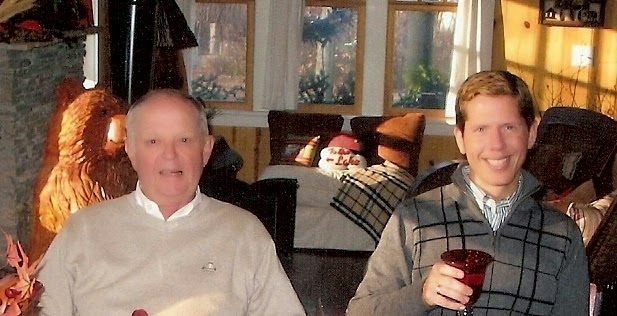 I never needed an alarm clock either. My father's booming, off-key voice was enough to wake the dead. So was his banging of pots and pans, jangling of keys, and making of coffee.
For years, he was my wake-up call, and that call began with the start of school in September.
No matter how old any of us are, whether we have kids, whether they're still in school or long gone, September is filled with nostalgia.
Though still warm, it marks the official end of summer. I can see it in the trees, some of whose leaves have turned more yellow, some of whose branches are tinged in color.
There is a return to routine, a societal flow as constant as the ever-cooling waves along the beach.
September is a sad farewell to summer and excited hello to fall: We can all recall the start of school, the ringing of the bell, the smell of the lunchroom and new books, recess, friends, old and new.
Much of September's nostalgia still applies today, even as I near 50.
As August's days end, I find myself saying goodbye to good friends I have spent time with over the summer months in our resort town, as they head back to their city lives and urban routines. Labor Day feels like an adult version of the last week of school.
Though I am sad to say goodbye to my friends â just as I was in school â there is an excitement about what lies ahead, too. September means a return to routine for me as well: Days spent waking early and writing with the windows open, evenings spent relishing the last warm days.
September's nostalgia makes it one of my favorite months. It is a middle ground for me, not only on my annual calendar but also on my calendar of life.
It is not quite summer, not quite fall, but a beautiful transition.
I am smack-dab in the middle of my own middle ground in life â not young, not old â and while I have great sentimentality for my past, it is tempered by my excitement for the future. Perhaps that is why September resonates so deeply in my soul: It still feels so young, but you realize, you know that it is aging, its days now more numbered rather than unending.
Sadly, my Septembers have become even more nostalgic, as my father is now battling dementia. He is weak but still doing well, but his memory â especially of my current life and of current events â is sketchy at best, and my heart breaks for him when he cannot recall things I've just told him.
But every September, I still ask him to sing his wake-up song â like he used to so long ago â and, amazingly, he can typically recall many of the lyrics.
And so will I, no matter how many Septembers lie ahead.