I received the best birthday gift of my life last week: Gary and I were married. 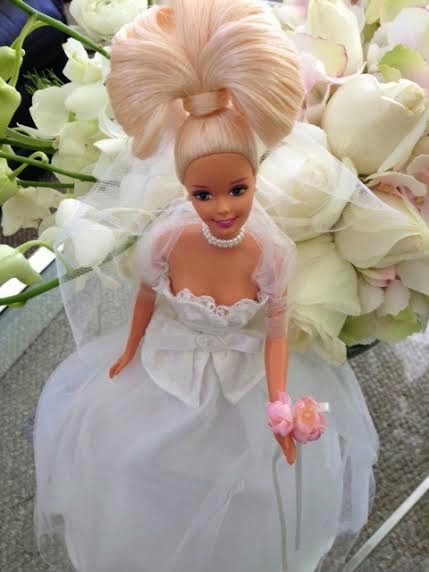 "We're getting married on Friday," Gary said when I picked up the phone, my legs churning beneath me.

"Screw Michigan!" he said. "I'm not waiting another second for anyone to decide when it's right for us to marry."

In the previous days, a judge had overturned Michigan's ban on gay marriage. Dear friends of ours had rushed out on a Saturday to marry. By Monday, the attorney general had challenged the ruling, and a stay had been put on marriage.

Our hearts were crushed. We had planned to marry on our anniversary date of July 27. We wanted to wed amidst Gary's beautiful gardens in front of our beautiful friends. Gary had already begun the planning.

But our dream had been taken away.

"We're here now, in California," Gary said, knocking me back into the present. "I called the courthouse. They have a little chapel attached. They have an opening Friday ..."

He stopped. I could hear him softly crying.

I hit "stop" on the treadmill.

Gary arranged for good friends (who married the week after us) to serve as witnesses, and another friend volunteered to photograph it. Gary made boutonnieres for us, color-coordinated them with our shirts and ties, and on the morning of March 28, we walked into a county clerk's office, signed a sheath of papers, attested we were who we were, paid our fees and waited to be married, along with a gaggle of other, very young, couples.

I couldn't help but think: This wasn't anything like the dream wedding we'd dreamed of.

But then, magic began to unfold.

A beautiful woman, whose cousin had just gotten married before us, ran over when she saw us waiting.

"Are you getting married?" she screamed.

She dissolved into tears. "I'm so happy for you," she said, bawling, pulling us into her arms and holding us tightly. "How long have you been together?"

Her face melted, and she heaved with sobs. "My brother and his partner have been together nine years," she said, nodding over at a handsome couple. "I want him to marry next."

"It's love and commitment like yours, and his, that are my shining examples. I strive to have a relationship as beautiful as yours."

And now it was us who began to tear up.

What she gets that most people don't seem to realize, I thought as she walked away waving, was that the gay couples "rushing" to marry have been together five years, 10 years, 25 years, 50 years. We have already committed our lives to one another.

We were ushered into the "chapel," a sort of holding room filled with the type of furniture you might have seen on "Three's Company." A wooden, lattice-y altar filled a wall, some plastic ivy strewn through it, fake flowers sprinkled around the room. An empty Kleenex box sat atop a vent.

Gary winced. "Why don't they paint this white?" he asked, touching the altar. "And get some real plants? And ..."

The woman who was to marry us bolted into the room and introduced herself. "How long have you been together?" she asked.

She began to cry.

And then she took our hands, and then placed them in each others', and she began the ceremony.

It was then I knew this was a dream wedding, because  I never dreamed this would ever be possible for me. I never dreamed I could marry, hear these vows, repeat these vows, have my relationship acknowledged by the government as the same as every other.

As the ceremony unfolded, I couldn't help but think of my life and relationship with Gary, similar in so many ways. Gary and I grew up in small towns in Middle America. Haunted by our sexuality, we relinquished our youth, unable to date, unable to share our true selves with our families and friends. Gary drank and I ate, until we finally found one another.

Suddenly, my emotions overtook me: This wasn't only a dream, it was historic.


"Do you have vows you would like to read?" the judge asked.

"Yes," I said, pulling a sheet of paper from my pocket, shocking Gary.

"What are you doing?" he mouthed.

"Marrying you," I whispered.

And then I began to read:

You are my compass and my bridge, my shadow and mirror, gardener of flowers and my soul. I would not be here, literally and figuratively, without you.

I love you more than anything in this world, and I am so honored to take you as my husband.

As she began to recite the vows, our voices went from quivery, to shaky, to unstable. Tears flowed.

And when we said, "I do," my life and my future flashed before my eyes.

I was married. To the man I loved.

As the judge pronounced us husband and husband, we kissed.

Gary slipped me the tongue, which was totally inappropriate.

And then he whispered, "You cannot go and get this annulled, either."

That evening, we gathered with friends for an unforgettable dinner. They even surprised us with a wedding cake ... topped with lots of buttercream frosting.

As we crawled into bed for the first night as a married couple, it felt like it always had.

Our wedding, like our friends' weddings in Michigan and California, aren't just weddings, they are the fulfillment of lifelong dreams. They acknowledge the power of love.