We have been a single-dog family for two years now, since the passing of our beloved mutt, Marge. That changed last week when we adopted Doris, a rescue from a local shelter.

I cherish routine so much -- writing, running, reading, lattes, hair products -- that once I fall into one that works for me, it's hard to break out of it.

"Mabel is six now," Gary said this summer. "She needs a sister. And so do I."

Gary is a weeper. He gets teary-eyed over Folger's commercials and flannel sheets with happy moose on them. And yet I often forget that when I'm working so much, he's alone. And sometimes lonely.

Gary has a heart as big as a Buick LeSabre. And he cares deeply about animals, especially dogs and cats that have been abused, abandoned, or dumped at a shelter. He volunteers his time and works hard to find the right home for abandoned animals.

And then one evening a shelter sent a picture of Doris (fyi ... not her given name in the beginning).

Gary held his cell in front of my face: What could I say?

The dog had been abandoned as a puppy. It had been been adopted and then returned twice by two different families. It had been dumped more in its life than, well, me.

And the strangest thing: It looked a lot like Doris Day. She was blonde, big-eyed, and sunny. In every picture, her fuzzy, white hair made a sort of halo around her face, like the movie publicity photos of Doris back in the day. 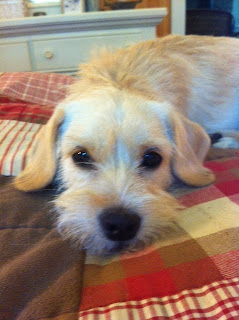 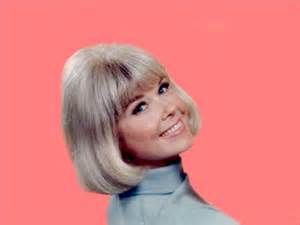 I adored Doris Day. Not only for her movies but also for her animal activism.

We fostered Doris for a few days (naming her Doris, of course), and she was a perfect fit: Mabel adored her new sister, playing so hard and so happily with her that she would just collapse in a heap, panting, a smile on her own furry face.

So, we adopted Doris.

Doris was a bit unsure in the beginning, though: She would get off the bed at night and go sleep alone, a big no-no in our house. She would stand back and watch our interactions, gauge us from a far. She put up a bit of a wall, as if she was waiting to be abandoned yet again.

And then one day we took her to the beach. She chased waves, dug in the sand, played with Mabel, and slept under an umbrella. On the drive home home, she napped in Gary's arms.

That night, Doris didn't leave the bed. In fact, her snoring woke me up. She was asleep between me and Gary, her head on my pillow.

I fell asleep. Hard. The next morning, after my routine breakfast of Kashi and blueberries, Gary left to do yoga, I grabbed my coffee and went upstairs to my office to write.

Mabel was already waiting for me at the top of the stairs, accustomed to our routine. I turned on the lights, Mabel curled up on a pillow beside me, and I sat down in my chair. Doris rushed up the stairs, a blur of white, and then, suddenly, stopped in her tracks.

She was not used to this routine. I called her to me, told her it was OK, and kissed her blonde head.

And then the strangest thing happened: Without prompting, Doris disappeared into the nook underneath my writing desk and curled all 20 pounds of her blonde body on top of my feet.

I stared straight ahead, stunned. In front of me, on my desk, was a photo of my beloved Marge, who had passed away in 2011. Marge -- all 80-plus pounds of her -- had done the same thing with me for endless days over countless years: Curled up in this nook and slept on my feet while I wrote.

I finished five books with Marge touching me.

Gary may be a weeper, but I'm an ugly crier. And so I started bawling, as Doris snored on my feet.

And so, my old routine has a new wrinkle. Her name is Doris.

And she has already touched my soul ... and she is already helping me finish my next book.