Growing up, I was obsessed with books, movies and Barbies.
Not much has changed in four decades.
That trio always captured the most important artistic elements to me: Escapism, entertainment, beauty, and a way to make sense of the world.
As a child, I yearned for Barbies. I begged for them as birthday gifts and Christmas presents. But as an Ozarks boy coming of age in the 1960s and 1970s, I got BB guns, fishing poles, trains and GI Joes instead.
So, I turned to books and movies. I adored Cinderella. I loved Nancy Drew.
As I aged, I became enthralled with how the two overlapped: My favorite literary characters often became my favorite movie characters.
Scarlett OâHara.
Bridget Jones.
Miranda Priestley.
Tracy Flick (Reese Witherspoon/âElectionâ)
As an author, I work hard to make my characters memorable. I preach to aspiring writers about the minute details that make literary characters so memorable â from dialogue to dress â be it my mother or Scarlett.
Or Barbie.
When I met my partner, Gary, we discovered that we had both been robbed in our rural childhoods. We both wanted Barbie. We both got Hot Wheels. So, the first purchase we made together as a couple was a Barbie. We marched into Target and spent hours perusing the many versions of Barbie that now existed. And yet we picked an old-school Barbie, the kind with big boobs and blonde hair and no quantifiable profession. 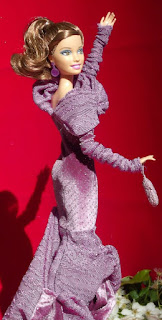 Over time, Gary and I began to buy more Barbies, and they became not only our makeshift posse when we traveled the US on book tours and lectures but also our alter egos.
We created Trailertrash Barbie as an homage to many of the redneck gals we knew growing up in rural America. We created Barbies after friends and fans, we created Barbies after relatives, we created Barbies from book characters.
We created bookish Barbies and beer-loving Barbies.
And, then one winter about four years ago, Gary and I were watching the Oscar Red Carpet, aka the gay Super Bowl. Suddenly, we just looked at each other without saying a word, knowing exactly what the other was thinking, sort of like twins do.
That day sparked our own annual Red Carpet tradition: We now style Barbies after the stars nominated for Oscars.
Weâve designed Meryl Barbies and Viola Davis Barbies. Weâve created Halle Berry Barbies, Reese Barbies, Bullock Barbies, J-Lo Barbies along with Joan Rivers Barbies and, of course, Lindsey Lohan Barbies (I mean, you just have to her crash the Carpet).
Our Barbie Red Carpet has grown more elaborate over the years: One of our best friends, a designer and doll insider, snags us the latest Barbie fashions. Stylists submit dresses to us. People from all over the US now beg us to do it.
Yes, itâs fun, but Iâve also learned playing with Barbies as an adult has made me an even better writer. I create memorable characters. I obsess over details. I have no fear about what people think. And I laugh, and hope that I am entertaining others, bringing some humor and light into their lives, even if for a few moments.
Books, movies and Barbies.
Not much has changed in four decades.
And I couldnât be more thrilled. Because Iâve learned that trio still captures the most important artistic elements to me: Escapism, entertainment, beauty, and a way to make sense of the world.

For a chance to view this yearâs Barbie Red Carpet â and win a signed Barbie (of course) by yours truly â please head to my Facebook fan page on Sunday, Februrary 24.
https://www.facebook.com/pages/Wade-Rouse/86031327538?ref=ts&fref=ts