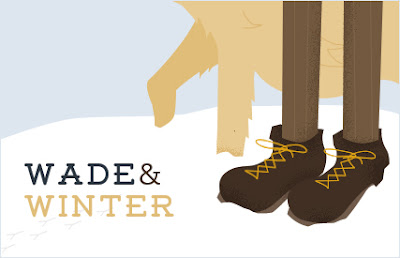 Some words just belong together.

Or Captain and Tennille.

Wade and Winter, not so much.

We do not go together, to quote that song from Grease, like rama lama lama ka dinga da dinga dong.

But I am learning.

I am not, by nature, âhardy.â I prefer to wear flip-flops instead of boots. I like tank tops more than sweaters. The only lake effect I enjoy is sand between my toes and a bronzy tan.

I grew up in the south and then lived in a city that had relatively mild winters.

As many of you know, I came unhinged my first winter along The Beach Coast. I yelled at the snow. I chastised the wind. I belittled blizzards.

It didnât do any good. It still snowed. A lot. It was still cold. And, you know what, once I shut up, I realized winter here was not only quiet but also quite beautiful.

The hush of a world covered in snow.

A wonderland of white replacing the dead, brown earth.

The icy lake, the waves seemingly frozen in mid-air.

More than anything, I found great comfort and inspiration in the quiet and isolation.

There is a beauty, I learned, in this seasonal slowdown, if you can just learn to slow down yourself.

It took me a spell, but I finally did.

And when that happened, I found a calm in waking early in my winter world, relishing the quiet I once only dreamed I might have, making coffee and padding in thick socks up to my writing studio overlooking snowy woods, a virtual winter wonderland, a writerâs paradise.

Once I got the rhythm of winter, I could appreciate the glory of the snow as it piled up on the branches of the sugar maple just outside my window. My lunch breaks were walks in the woods with my dogs. I wrote until the sun set. I did the same thing the next day and the next.

By the time spring arrived my first winter here, I had nearly finished a book.

Winter had not only granted me peace and quiet but also a bonus gift of additional free time that I could now spend outside.

Donât get me wrong: I still love spring, summer and fall more than winter. Gary and I still leave in the dead of winter and head to California for warmer climes (though more and more of that is now work-related and ârequired), but I have learned to be at peace with winter along The Beach Coast. Winter is like that family member that can drive you crazy, challenge you, get under your skin. He or she can be totally annoying, but is the person you secretly kinda like, the one you end up understanding, and respecting, after a long period of time.

And that, Iâve come to realize, is a great gift.

Winter and I may never be as close as M&Mâs, but weâve earned one anotherâs respect, and when we play nicely together, we make a pretty good team.